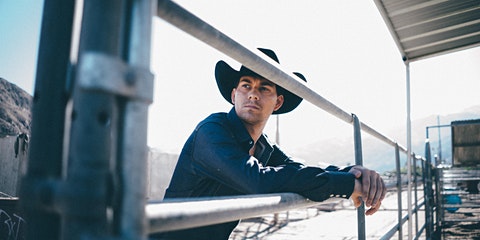 WE ARE CURRENTLY HOLDING CONCERTS AT 50% OCCUPANCY, WE HAVE PLACED SEATS ON HOLD NEXT TO THE PURCHASED TICKETS-TO ENSURE SOCIAL DISTANCING & MASKS ARE MANDATORY.

William Michael Morgan has only just arrived in his mid-twenties, but the Mississippi native is the very definition of an old soul.

William Michael Morgan has only just arrived in his mid-twenties, but with a love of country music deeper than The Big River itself, the Mississippi native is the very definition of an old soul. His pristine Southern vocal, timeless sound and honest lyric represents a new generation of hit-makers in Music City – modern day descendants of artists like Randy Travis, Alan Jackson and George Strait. After signing his major-label deal at the tender age of 19, Morgan began by hitting the top of the radio charts, landing at No. 1 on Mediabase with the Gold-certified “I Met a Girl.” He then released an acclaimed EP and earned a Billboard Top 5 with his 2016 album debut, Vinyl. He has performed more than 50 times on the Grand Ole Opry and was featured by the Country Music Hall of Fame and Museum as a highlighted artist in the 2017 American Currents exhibit. But now that he’s a few years older – and a few hundred shows wiser – this old soul is looking toward a new horizon. “I thought our first album was a very good representation of what we do and what we like, so we set the bar really high,” says Morgan of his next batch of country tunes. “My whole message with this project is that I want to show growth – not only musically, but also personally. … I feel like now I understand myself, and I understand the music I want to make.” Produced once again by Scott Hendricks and Jimmy Ritchey, five new tracks show off the man Morgan has become. A hard worker and big-time dreamer, a single father and hopeless romantic, and a pure country stalwart who’s not afraid to embrace the here and now. His new music is still drenched in twang and tenderness, but also infused with fresh energy from across the musical spectrum.

Morgan has grown a lot since he first slid into the Music City mainstream. But no matter how much growing he does, some things will never change – like his passion for sharing country lyrics with pure, raw emotion with the fans who feel the same way. “I think we all still feel like kids sometimes,” he says. “Every time I hit that stage I go back to my old Mississippi honky-tonk nights. Those four-hour sets, loading in and loading out in a smoky bar, sneaking a beer or two when mom and dad weren’t looking – just having a good time. Even today, it’s still for the pure joy of it.”