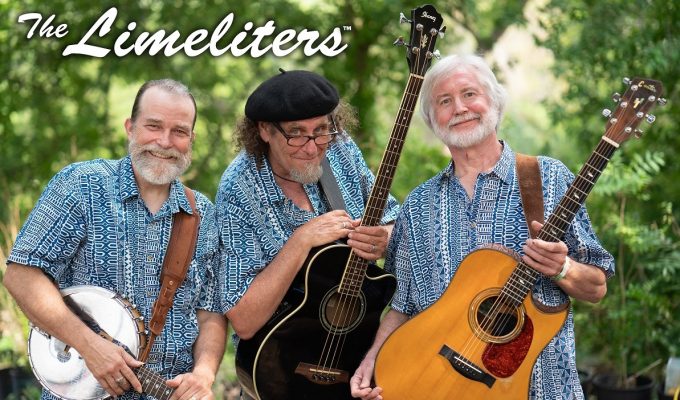 The Limeliters first made their mark in folk clubs and on college campuses during the height of the folk music boom of the early 60’s. Before long, founding members Alex Hassilev, Lou Gottlieb and Glenn Yarbrough emerged as one of the dominant voices of the early 1960’s folk music scene. A string of best selling albums for RCA Records and frequent appearances on dozens of major TV shows quickly made them a household name. For three years they were the musical representatives for Coca-Cola, and their rendition of the jingle “Things Go Better with Coke” became a national hit.

Today’s three Limeliters are all veteran folksingers and multi-instrumentalists, with busy solo careers when they’re not joining voices. Andy Corwin and Daniel Boling have each won Texas’ prestigious Kerrville New Folk competition, while Steve Brooks was twice a finalist in the Texas Music Awards for Singer-Songwriter of the Year. Corwin joined the band in 2004, and spent his first few years in the band touring alongside original member, Alex Hassilev. Steve Brooks, a Limeliter since 2018, sings baritone while playing guitar, mandolin and harmonica. Daniel Boling rounded out the current lineup in 2019, picking guitar and banjo as he soars on the tenor parts. They meticulously recreate the group’s original arrangements under the mentorship of its last surviving founder, Alex Hassilev. In their nationwide tours, they often share stages with fellow ’60s “folkies”, The Kingston Trio and The Brothers Four.