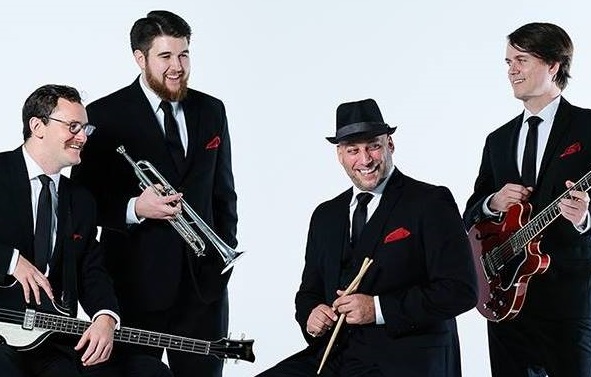 The Four Freshmen are America’s most enduring vocal group. From the moment they step on stage, The Four Freshmen will get your heart pounding and your feet moving. With pure energy and great songs from the past and present. The Four Freshmen deliver a world of music that will take listeners back to the bygone era of their youth while introducing others to a brand of vocal harmony entertainment unique to the legendary Four Freshmen. A Four Freshmen concert is one you will never forget!

One might think that after 69 years, a multitude of recordings, 6 Grammy nominations to their credit, they would just ride the wave of success through nostalgic renderings of hits like “It’s A Blue World” and “Graduation Day”, but you would be sorely mistaken. One thing THE FOUR FRESHMEN do as the celebrated vocal group has done since its inception in 1948 has been to forge ahead; constantly redefining their sound all the while maintaining the core integrity of their unique and innovative vocal harmonies that have inspired such iconic groups as The Manhattan Transfer, The Lettermen, and the legendary Beach Boys.

While The Four Freshmen happily pay tribute to the history and evolution of the Freshmen sound by way of performing the hits of their predecessors they are unafraid to break new ground through songs that strike a chord with listeners of ANY generation. Whether it be a reimagining of such classic standards as “Come Fly With Me” and “Stompin’ At the Savoy”; profoundly evocative and energetic interpretations of Antonio Carlos Jobim’s seminal hits “The Girl From Ipanema” and “So Danco Samba”; or the introduction of heart-wrenching originals like “A Little While”, the listener will be taken on a musical journey via the greatest songwriters ever to set pen to paper and four accomplished musicians who, from the stage, exude nothing less than the energy, sincerity, and passion deserving of the great music they perform.