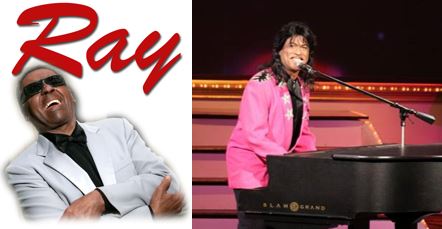 Frank’s Ray Charles Show is an amazing reproduction both visually and vocally. This show has appeared in the major capitals of the world. Just a few of the countries he’s toured include JAPAN, PORTUGAL, GERMANY, HOLLAND, AUSTRALIA and SWITZERLAND.

Frank performed “America the Beautiful” at the Edward Jones Dome in ST.LOUIS, MO. This was a career milestone to be able to perform such a moving song, backed by a 500-voice choir for 24,000 people.

Ray Charles was one of the greatest entertainers of our time. Ray’s music has become part of our lives and such an important part of the American Pop Culture. From the Soulful early songs, the Country favorites, to the pop hits of the 60’s and 70’s. You will marvel as you travel through time and enjoy virtually all of Ray’s biggest hits, just as Ray would have performed them.

Frank is one of the best Ray Charles Tribute Artists in the world. If you have never seen Ray Charles, or simply want to relive “Ray Charles in Concert”…Don’t miss this show!

“Good Golly Miss Molly”, Garry Moore can sure sing and dazzle audiences with his spot-on impersonation of rock and roll legend Little Richard. For over 20 years, this self-taught native of Japan has been performing for Legends in Concert and corporations throughout the United States and around the world.

Sitting in a Legends show in the 80’s was the catalyst for Garry’s career as a tribute artist and performing as one of the early pioneers in rock. “I was at a Legends show and amazed at how the audience, including myself, were wowed by the performances. The Sammy Davis Guy came on stage with the Voice” Height! Skinny! And moved around light on his feet!!! He was Sammy Davis, Jr.”

Garry, a military brat, who “traveled all over the place,” has always been interested in music and was strongly Influenced by the Beatles, Elvis, Tom Jones, Motown and the Jackson 5. This professional “shower and car singer”, as he calls himself, first started performing as Little Richard on the Jerry Lewis MDA Telethon. “I didn’t really want to do it, but with a little coercion and support from Tony Roi, an Elvis Tribute artist, I did it. Next thing I knew, I was performing in Aruba, in the Caribbean, for six months.”