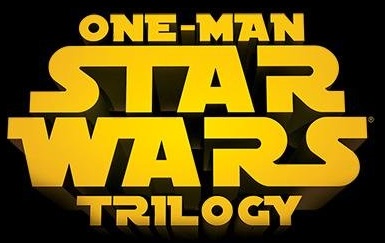 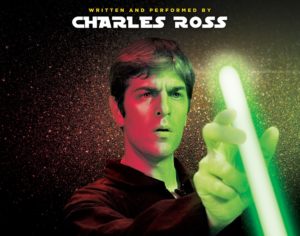 Man Star Wars Trilogy Canadian actor and uber geek, Charles Ross, brings his solo madcap creation One-Man Star Wars Trilogy to the stage in this mind-bending whirlwind of a show. Ross retells the classic bad hair trilogy in 60 minutes- no costumes, no props, no sets- all the characters, the music, the ships, and the battles. If your kid’s name is Chewbacca, this show is a no-brainer. If not, get your nerd on and experience the global sensation loved by audiences from London’s West End, Off-Broadway, Dubai, the Sydney Opera House, Lucasfilm, and Charlie’s mom. The Force is strong with this one. Written and Performed by Charles Ross Directed by TJ Dawe. One Man Star Wars Trilogy performed with permission of Lucasfilm Ltd. All ‘Star Wars’ elements property of Lucasfilm Ltd. All rights reserved.
Canadian actor Charles Ross may have the best job in the world: professional Geek.
As writer and performer of One Man Star Wars and One Man Lord of the Rings, he has toured the globe for the last 11 years, delighting audiences with his unique and frenetic solo shows.
Born in a northern British Columbian town (closely resembling the Shire), Charlie spent his early years longing for galaxies far, far away. It was the discovery of a passion for acting (and a move to more southerly climes) that brought this geek-at-heart back to earth.
At university, Ross formed a friendship and collaborating partnership with actor/writer/director, TJ Dawe. TJ has directed four of Ross’s solo shows- the first being the wildly successful One Man Star Wars.
After sold-out tours of North America’s Fringe theatre festivals, One Man Star Wars and One Man LOTR have taken on a life of their own.
Licensed by George Lucas and Saul Zaentz: carrying the official banner of Star Wars and Lord of the Rings- it’s fair to say that Charlie now dwells in geek heaven.
With thousands of performances, in hundreds of cities, across four continents: from off-Broadway NYC to the Sydney Opera House, or the West End of London to the sands of Dubai- chances are these shows have been there.
The worldwide love affair with these Trilogies is phenomenal- and it’s been a dream come true, for Charlie Ross, to celebrate that love with the generations of fans around the world.

SUITABLE FOR STAR WARS FANS FROM AGES 6 TO YODA!