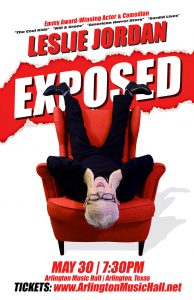 Leslie Jordan is one of the most consistently recognizable faces in popular entertainment. His journey towards stardom has provided one of the quirkier, impressive, and varied career trajectories of the past few decades.

His arrival in Hollywood back in 1982 (with $1500 sewn into his clothing by his steel magnolia Mother) was the starting point. After a brief career as a jockey, Jordan has enjoyed the full show-business spectrum; the lean days, the bumps in the road, the acclaim, reaching the pinnacle of television performing with award recognition, the ensuing victory laps, followed by an alarming and unexpected down slope, the dangers of being type cast or stereotyped, the challenges to remain “current” and “relevant” in a rapidly changing world of technological advancement, and the ever present threat of being put “out to pasture” by a youth obsessed culture and industry.

Through it all, Leslie Jordan has remained constant, relevant and – above all – funny! His ability to take it all in stride has kept him moving onward, upward and forward!

Leslie Jordan is the prestigious Emmy Award winner in 2006 for “Will & Grace”. He has enjoyed rapturous reviews for his original stage plays (“My Trip down the Pink Carpet”, “Stories I can’t tell Mama”, “Fruit Fly”), and supporting presence in one of Hollywood’s most prestigious, message-minded films of the last decade (“The Help”, 2012).