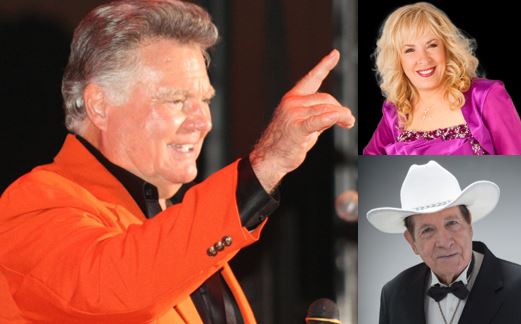 Leroy Van Dyke, of “Auctioneer” and “Walk On By” fame, star of the movie, “What Am I Bid?” is known around the world as an entertainer, recording artist, radio and television star, actor, auctioneer and veteran of the Nevada circuit. He has recorded over 500 songs, and probably holds the record for most repeat-performance bookings of any working, name country music entertainer. He has worked 40 to 70 fairs and livestock events per year for over five decades, in addition to a great variety of other engagements.

Barbara Fairchild has been entertaining since she was 5 years old. The phrase “to see her is to love her”, is really true of Barbara. Her sincere love for people and bubbly personality make everyone around her feel good. Barbara’s career in country music accelerated in 1973. She was nominated for a Grammy when her song, “The Teddy Bear Song” reached #1 on the charts. She has had many hits following “The Teddy Bear Song”, including “Baby Doll” and “Kid Stuff”.

Claude Gray’s first hit was the classic song “The Family Bible” which was a country smash at the time reaching No. 7 on the Billboard charts.  In 1961 his debut record for the Mercury label was the million seller “I’ll Just Have A Cup Of Coffee Then I’ll Go” which was followed by “My Ears Should Burn When Fools Are Talked About.”  This song also climbed in the Billboard top ten and was written especially for Claude by his close friend Roger Miller.