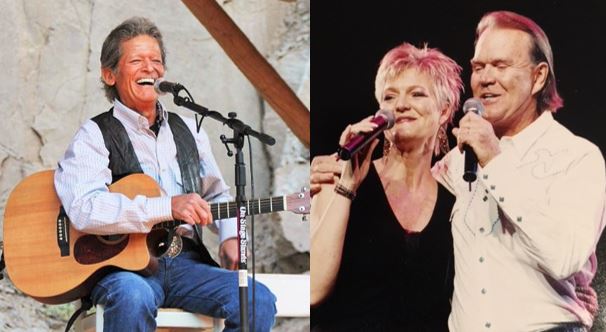 The union of producer Tom Collins and Capitol Records in 1987 resulted in Rodriguez’ album titled “Gracias”, which contained such hits as “I Didn’t (Every Chance I Had)”, “I Want To Wake Up With You” and  “You Might Want To Use Me Again”. In 1993, Johnny recorded “Run For The Border” on Intersound and in 1996 he reunited with the Dea/Kennedy team to truly capture the fire and magic of their past collaborations with the creation of “You Can Say That Again”.

Country music singer and activist for Alzheimer’s, Debby Campbell was born in Albuquerque, New Mexico in 1956 to Diane Kirk and Glen Travis Campbell. She is the eldest of 8 children and the daughter of the most famous “Rhinestone Cowboy” Glen Campbell. Debby loved singing from an early age and spent many summers with her dad on tour, and in the television studios with his Glen Campbell Goodtime Hour television show.

Debby graduated high school in England living with her mom and step-dad Jack, while her step-dad was in the Air Force. Her dad, Glen became a world sensation, and would perform in England and send for Debby so she could spend time with him.