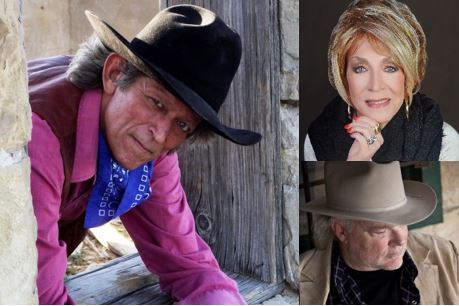 The union of producer Tom Collins and Capitol Records in 1987 resulted in Rodriguez’ album titled “Gracias”, which contained such hits as “I Didn’t (Every Chance I Had)”, “I Want To Wake Up With You” and “You Might Want To Use Me Again”. In 1993, Johnny recorded “Run For The Border” on Intersound and in 1996 he reunited with the Dea/Kennedy team to truly capture the fire and magic of their past collaborations with the creation of “You Can Say That Again”.

Today Jeannie Seely chuckles when she recalls her decision to move to Nashville in the fall of 1965. “It’s true,” she says, “that I only had $50 and a Ford Falcon to my name”.

Actually, the blonde, blue-eyed singer brought a lot more than that to Music City. She had natural talent, striking intelligence, and a strong determination to turn her dreams into reality.

Less than a month after moving, Jeannie was hired by Porter Wagoner as the female singer for his road show and television series. Despite being initially turned down by every record label in town, within six months she was in the studio recording the first of many hit songs. Within a year Jeannie was singing on the world famous Grand Ole Opry stage, where she still performs on a regular basis.