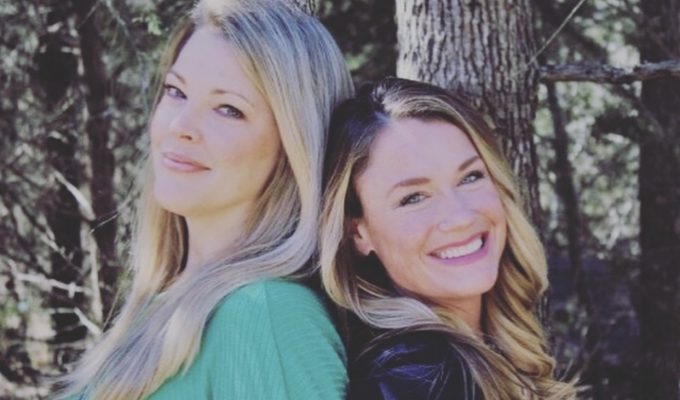 Friends since their teens, Texas High Road consists of industry veterans Hillary Bergman-Stanton and Stephanie Pruitt. The duo’s sound centers around 90’s Country with some pop and top 40 mixed in.

Hillary Bergman-Stanton began singing on stage at just 6 years old. At the age of 8, she competed in a talent contest at Casa Mañana in Fort Worth Texas, where she tied for first place with LeAnn Rimes. In the audience that evening, was Johnnie High of the very popular variety show Johnnie High’s Country Music Revue. Hillary became a weekly performer on his show, and continued on that stage for over 20 years. She went on to perform on the Shoji Tabuchi show in Branson Missouri, and later moved to Nashville. During her years in Nashville, she did recording studio work for songwriters. Hillary still does vocal work for recording studios in the Dallas area. She has performed all over the world, including cruise ships and even yodeling on a show in Austria!

These days, Hillary enjoys making great music with her friends in Texas High Road, and spending time with her 3 daughters, and husband, Brian.

Stephanie began singing when she was in middle school, and to this day she considers music to be one of the great loves of her life. She grew up performing regularly throughout the DFW area in Opry’s and performing halls like Johnnie High’s Country Music Review and the Grapevine Opry. Stephanie actually met Hillary sometime in the mid-1990’s when they were both performing at Johnnie High’s – a fact that, years later, helped lend to the Texas High Road name!

Upon graduating high school, Stephanie spent several years in the shows at Six Flags Over Texas, and here she met two great friends who would later join with Stephanie to become the trio called Maiden Texas. Maiden Texas spent upwards of a decade performing throughout Texas for both private and community events, and the girls of Maiden Texas even performed live in Los Angeles on an NBC show called “Your Big Break”. Several of the most memorable singing experiences for Stephanie include opening for Randy Travis and performing at the State Fair of Texas on the Chevy Main Stage.

In more recent years, Stephanie has tried her hand at songwriting in both the gospel and country genre’s. As a bit of added fun, in 2013 she entered a written jingle into a competition for Folgers Coffee where her tune was chosen as a top 10 finalist. Nowaday’s, Stephanie lives in Arlington, TX with her husband and 2 boys – Caleb and Coleson. Though 2020 was a very tough year with many disappointments for many, Stephanie is extremely happy to be regularly performing once again with Hillary and the guys of Texas High Road.