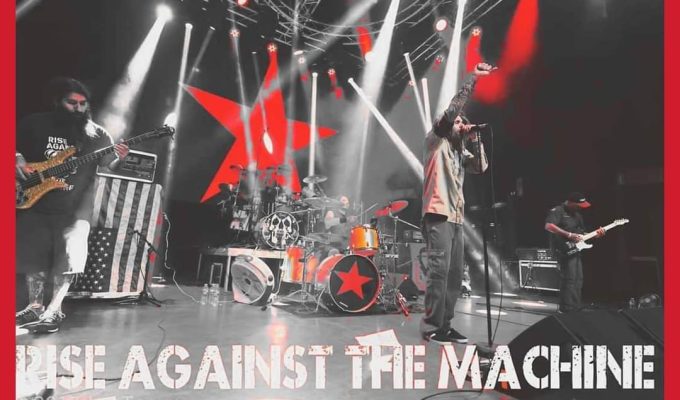 RISE AGAINST THE MACHINE

Rise Against the Machine was founded by founding members Robert Garza, Johnny Lozano, Alan Ayo, and Justin Young in the summer of 2011. All four original members were playing in other original bands at the time. Alan Ayo (Scary Cherry and the Bang Bangs), Robert Garza (Mad Mexicans), Johnny Lozano (Mad Mexicans), and Justin Young (J. Charles & the Trainrobbers & The Rich Girls). Alan Ayo went to see Mad Mexicans perform at the Curtain Club in Dallas, TX back in July 2011. After a fun night at the Curtain Club Ayo went home and had a dream that night that himself, Robert, and Johnny all started a Rage Against the Machine tribute band. The very next day Alan called Robert to tell him about his dream, and asked Robert if he was interested in starting a Rage Against the Machine tribute band. Robert knew to call his long-time guitarist, Johnny Lozano, to see if he was interested. Johnny immediately said yes. Justin Young was asked to play bass and he was onboard.

Rehearsal immediately started in August 2011. Within 3 months Ayo’s friends, who were in a Beastie Boys tribute band (Rhymin’ & Stealin’), asked if they were interested in opening up for them at the House of Blues Dallas. At the time they didn’t have a name yet and needed to have a name by 5pm that day so they could add the RATM tribute band to the website. After several names they settled on “Arm Tha Homeless”. Arm Tha Homeless began to make waves in the Dallas/Fort Worth tribute band scene and began playing at all major clubs in Dallas, Oklahoma, and Tennessee.

Justin Young left the band in 2012 (due to being overloaded with being in 5 bands) and Tony Coke, guitarist for Scary Cherry and the Bang Bangs, replaced Justin on bass guitar. Tony played bass for about a year and Tony went on a 2 month tour with his original band. Tony Coke was then replaced by Jeremiah Fuentez in 2013 and has been the bass player ever since. Ayo decided to take on other musical projects and played his last show at the House of Blues in July 2014 to a crowd of 1,200 people! Ross Rubio (drummer for The Commotion, Moving Atlas, and Hip Hop Hooray) stepped up and took on the drumming duties.

The band decided to change it’s name from “Arm Tha Homeless” to “RISE AGAINST THE MACHINE” in July 2014 due to the line up change. In October 2014 all for members (Robert Garza, Johnny Lozano, Jeremiah Fuentez, and Ross Rubio) went to the studio to record 3 songs: Killing in the Name, Bulls on Parade, and Guerrilla Radio. It was finally mixed and mastered in March 2015.

In the early Spring of 2016 Robert Garza left the band and a search for a new singer went into action. Welcome new vocalist Dustin Tomas! Dustin brings a raw energy and intensity for the band. Due to Ross Rubio being in 2 other bands Ross decided to leave the band, and a talented drummer, Ray Villarreal, stepped up to fill in with the drumming duties. Dustin and Ray had their 1st gig on June 25th, 2016!

Rise Against the Machine are: