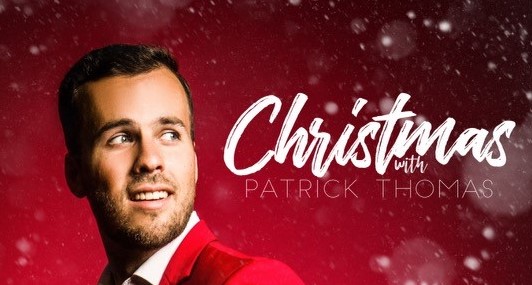 Bring the family to celebrate the holiday season with Patrick Thomas and special guest Michael Hix. A multi-instrumentalist, singer-songwriter and live finalist from season one of NBC’s “The Voice”, this DFW native is bringing his annual Christmas show home for the first time. The son of two Broadway performers, Patrick’s first foray into country music was on the Arlington Music Hall stage with Johnny High’s Country Music Revue. Thomas was a regular at the AMH throughout his childhood before moving to Nashville at 18 to pursue a music career and attend Vanderbilt University.

A genre-bending artist, Thomas spent the decade following his appearance on “The Voice” writing songs with Nashville’s best, penning hundreds as a signed songwriter in Music City. Exploring a variety of styles from musical theatre, (he composed a musical entitled “The Battle of Franklin” that would break box office records for the premiering theatre), to pop, R&B, and country, he eventually began work on his 2017 debut album with Grammy Award winner Mark Bright.  Meanwhile, Thomas was busy touring the country with Broadway vocalist Rachel Potter, co-starring in “Country Legends”, a concert-style musical revue of country music through the ages designed specifically for symphony orchestras. The show toured for over five years, appearing with orchestras from Alaska to Hawaii and everywhere in between.

Thomas, often recognized for his ability to adapt and improvise regardless of genre, returned to the national spotlight when Nashville hosted the 2019 NFL Draft. As each player was selected, he wrote and performed thirty-second “jingles”, live for CBS, each tailored to the specific athlete and team.

Thomas is continuing to write, record, and release new music while awaiting his debut as Paul Simon in the US/Canada tour of “The Simon and Garfunkel Story” after extensive, pandemic-induced delays. For booking information and links to music and social media please visit www.PatrickThomasMusic.com