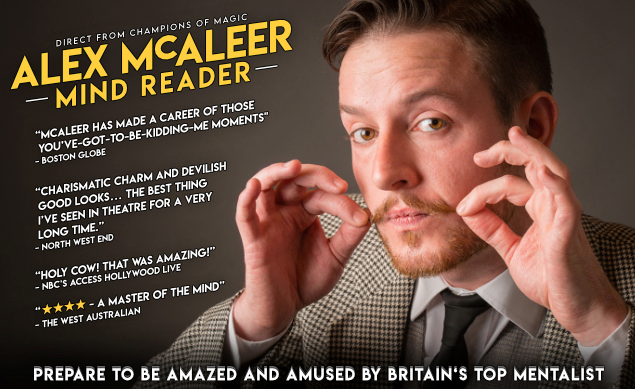 Alex McAleer possesses the uncanny ability to apparently tap into his audiences’ minds and read their thoughts at will. However he doesn’t pretend to be a ‘psychic’ who reads fortunes or talks to the dead. Instead he reads people and talks to the living, combining contemporary mind reading with sharp wit and a flair for showmanship.

Being an only-child, Alex had many hobbies growing-up, including magic, but it wasn’t until his mother passed away when he was fourteen years old that he dedicated his life to studying the manipulation techniques of psychics, mentalists, and hypnotists. Gradually, he taught himself the unusual skills and techniques that would eventually take him all over the world.

Alex is also a successful writer in the magic world, having written several books on his own techniques and delivered lectures to psychology students, mentalists, and magicians at the prestigious Magic Circle.