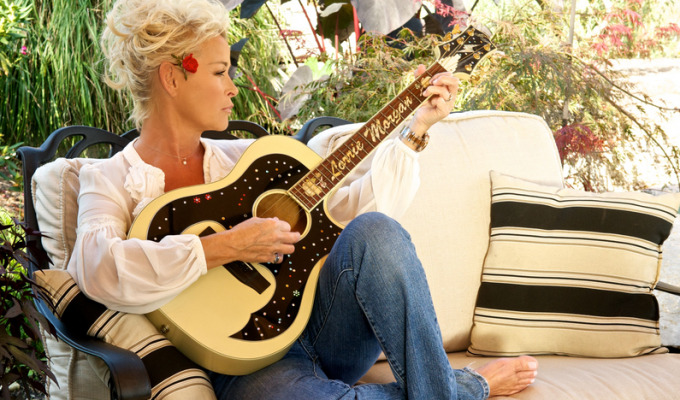 Lorrie Morgan, the first woman in her genre to begin her career with three consecutive Platinum albums, is back in the studio with award-winning producer Richard Landis, working on a new album. It is sure to be yet another collection showcasing the rainbow of emotions, from darkest heartache to bright, shiny humor, that is the hallmark of Morgan’s range. “Where I am in my life right now, I’m not afraid to express what I feel,” she says. “I’m not afraid to express my views on anything, especially on being a woman and my experiences in this business and in life.” Morgan is known for her lustrous vocal phrasing and the down-to-earth believability of her torchy performances. On records such as “A Picture of Me Without You” and “I Guess You Had to Be There,” the ache is palpable. She is feisty and sassy on “Watch Me,” “What Part of No” “Five Minutes” and “I Didn’t Know My Own Strength.” She has kicked up her stiletto heels in fun on her hits “Except for Monday” and “Go Away.” On her epic “Something in Red” she is an honest, struggling everywoman. She has been a daughter, a bride, a mother, a divorcee, a widow, a single mother, a breadwinner and, ultimately, a survivor. In many ways, Lorrie is a living, breathing country song, and she knows what she sings. “I didn’t want to just do another album. I want it to be something that really moves me. When I listened to songs for it, I’d think, ‘No, not that one. I’m not going to be able to sing that one, because I’m not going to be able to feel it.’ It is very important to me for this album to reflect the things that I am feeling today.” Recently in Nashville, Morgan commanded a stage shared by the iconic Judy Collins, in a concert performance honoring the 30th anniversary of LA-based record label, Cleopatra Records. She continues to match any of her earlier efforts, with an emotional range and a stage presence that is as vibrant as ever. She is a peerless song interpreter, drawing from a deep personal well that spans enormous tenderness to cheeky hutzpah. Whether covering a classic or sharing one of her own songs, Morgan is truly a song stylist in the grandest tradition. “I have always been a songwriter and I do love to write,” she comments. “But I’m only comfortable co-writing with a few people, and I don’t like appointment writing at all. Plus, I’m not one of those people who says, ‘If I didn’t write it, I’m not going to record it.’ If somebody else’s song is better, I’m going to record it and not my own.”

“My children and I are thrilled to see Keith’s name added to the list of stars who’ve earned their place in the Country Music Hall of Fame,” she says. “It is a well-deserved honor, though Keith himself would’ve been painfully humbled. I am happy for his family and the many, many fans who continue to point to Keith as one of the all-time greats.” In 2013, Morgan first teamed with fellow Opry star Pam Tillis, daughter of Country Music Hall of Famer Mel Tillis. for the duet CD Dos Divas. The two hit makers then embarked on a joint tour that sold out every appearance in its initial two-year run. The stars continue to perform their collaborative Grits & Glamour shows, as schedules allow. The women connected as working mothers, as businesswomen, and as second-generation performers. They share an understanding, and a finely honed, if occasionally bawdy, sense of humor.

On the outside, Lorrie is very lighthearted. Still, on the inside, she carries a lot of pain. Singing is her therapy, she has said. “My dad used to say, ‘You should never take yourself too seriously,’ and I got my sense of humor from my dad. I love to have fun. I’ve reached the age where I feel that I deserve good company around me, people who can make me laugh, who love music and who love to have a good time.”