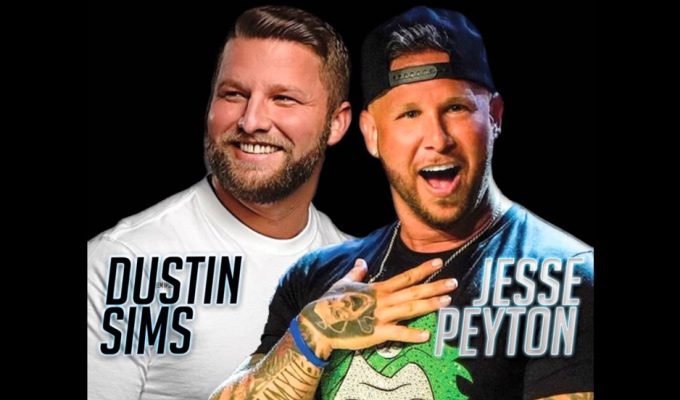 Dustin Sims is a comedian from Oxford, Alabama. Best known for his Snapchat videos and ‘Talking to Myself’ series. His unique style of storytelling has accumulated him over a MILLION followers across social media. Dustin’s raw comedy is mostly centered around bizarre life experiences that are guaranteed to keep you laughing! Also be sure to check out his podcast ‘Poor Taste with Dustin Sims’ on Youtube.

Houston Native, and charismatic comedian, Jesse Peyton has headlined shows at top clubs all over Texas. He’s also been featured nationally, opening up for mega-comics Donnell Rawlings, and Steve Trevino. He’s appeared on Sirius XM Radio’s Shade 45, performing live at Caroline’s on Broadway as a national finalist for the Sway in the Morning Show’s Comedy Search in 2020.

Jesse was a runner-up in 2019 in the prestigious Funniest Comic in Texas competition, and he placed First in all of Houston. Jesse has made regular appearances on Blaze TV and the Ken Webster Show.

Jesse begins 2022 in his second year co-headlining the Unapologetic Tour with Chad Prather while also featuring nationally on 2 separate tours…”Blame the Bourbon Tour” with Dustin Sims and “Forgotten Breed Tour” with Zach Rushing.

Performing in more than 100 cities a year, you will soon have a chance to see Jesse live and witness first-hand why this rising star is taking the country by storm with his fast-paced, witty, and energetic talent.