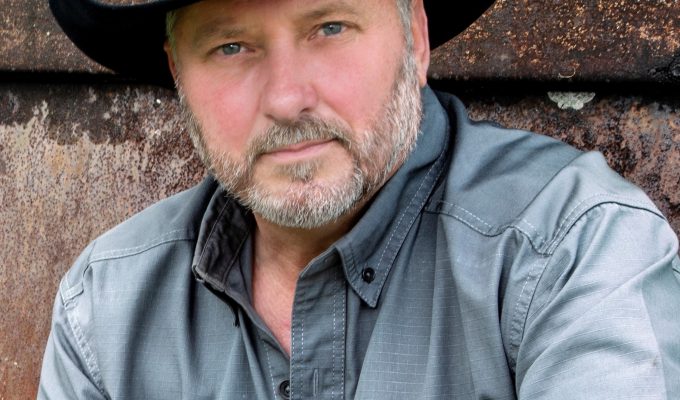 Jeff Carson has come full circle with careers that have allowed him to do the two things that he loves –music and police work.

As a youngster, he and his family would sing three-part harmony on trips. One of those trips was to Branson, Missouri, where he saw a show that inspired him to tell his high school counselor that he wanted to get into music. The counselor didn’t discourage Carson; instead, he picked up the phone and made some phone calls and that encouraged Carson to pursue a career in music.

After high school graduation Carson entered a talent contest sponsored by Ozark Mountain Music in Northwest Arkansas and came in second place. He won the brass key, however, because the singer from the winning band asked him to join their band as lead guitar player. Although he really didn’t consider himself a lead guitar player, luck stayed with him and that band’s bass player quit right after he joined the band.

Carson was content in Branson, but his wife Kim convinced him to move to Nashville, which they did in 1989. In Nashville, his luck stayed with him, because a friend of his wife had a duo that was working at Opryland Hotel and their bass player had just quit. They hired him and he was fortunate to not have to take on another job outside of music. In addition to playing with them, he also persuaded the hotel to hire him as a solo act.

Carson quickly learned the places to meet other music business folks were the songwriter nights at local Nashville clubs. He also volunteered to do demos for songwriters for free so he could get his foot in the door to sing demos. He sang demos on songs that turned into hits for Tracy Byrd (“Walkin’ To Jerusulum”), Tracy Lawrence (“I See it Now”), Reba McEntire (“The Heart Is A Lonely Hunter”) and Tim McGraw (“I Wouldn’t Want it Any Other Way”), Faith Hill (“It Matters To Me”).”

Singing demos turned into a lucky decision for Carson when he met record producer and publisher Chuck Howard, who cut three or four songs on him that were good enough to pitch to labels. Howard was instrumental in getting him his label deal at Curb Records, and soon a single, “Yeah Buddy,” released to radio.

“It was my first charting single, and it set me up for the next one, ‘Not On Your Love,’ which became my first number one single. The following single, ‘The Car,’ became a top five hit, topping out at number two. That song brought in many stories from people about their father. I remember one that really touched me – we were in California and playing the song on radio and one guy called in and said, ‘I haven’t talked to my dad in 20 years, and when I heard that song I had to pull over and call him’.”

Carson had several other singles, including “Real Life (Was Never The Same Again)” from his album “Real Life.” An album release party was planned for “Real Life” on September 11, 2001. That morning terrorists hijacked two planes to attack the Twin Towers in New York City and one that attacked the Pentagon in Washington, D.C. A fourth plane was hijacked from the terrorists and crashed in Shanksville, Pennsylvania. Its destination was unknown.

“The song made it into the Top 20 but it all changed after that,” Carson explains. “I had to make a tough decision on whether to continue in music or make a career change.”

For some people this would have been one of the worst decisions of their lives, but once again, luck intervened. Carson had always said that if he had not pursued music, he would have looked at a career in law enforcement.

“I was always very pro-law enforcement,” he explains. “If we had time after a show, I’d go ride with officers on patrol. I always said if music went away the only other thing I’d like to do would be a cop. So in 2007, when we went to a family dinner for Thanksgiving, Kim told me she was scared, but if I still wanted to be a policeman, it was okay.”

Carson went through the Police Academy in Franklin, Tennessee and was hired to the department in May of 2008. “I went through Police Academy, where I stayed on base for five days a week, and that lasted 12 weeks. Then Franklin had a 16-week Academy and three months of ride-a-longs before I was released out on my own. I was one of the older applicants for the Academy at 44.”

The singer admits that for about eight years he didn’t pick up his guitar, and then about three years ago someone called him and asked if he would do a show at a casino in Michigan. “I told him I’d see if I could remember the words to my songs, but really the words and chord progressions and playing guitar came back to me right away.”

After that, a person who books shows for the Fraternal Order of Police contacted him to see if he would like to do a few Fraternal Order of Police shows. “I liked that idea, so I did a Merle Haggard tribute and one to George Jones and played some of the older stuff and the audiences really liked that. After that I started to get other bookings and I’ve been back out on the road doing my music again.”

All that has led to two recent musical projects. Before Father’s Day this year, Carson sent out word via social media that he was going to do a video for his hit, “The Car,” and was looking for pictures of people and their father. He asked for photos of them doing something with their dad, or just a picture of them with him. “The song is about spending time with your dad and appreciate the times you had with him. A lot of pictures were submitted, and the video turned out really great.”

More recently, Carson has re-recorded “God Save The World,” a song he had recorded previously with Lisa Brokop that was not a hit. “Without a doubt this song is more relatable to today’s society than when I cut it years ago,” he admits. “This year has been bad and I think people will appreciate its message. It just felt like the right time to re-record it since it was not a hit previously.”

While all the new music opportunities are great, Carson plans to keep his job with the Franklin Police Department. “I’m not giving up police work. I get enough vacation throughout the year so I can go out and do shows. Like other entertainers, I had dates booked and then Covid-19 came along and they all had to be cancelled. I never wanted to leave music, but I love my job as a cop as well.

“I’m grateful that people remember me and when I play shows. They bring old pictures they had taken with me from Fan Fair or a show I did near them. It is touching to see these pictures from the fans and know they still remembered me and loved my music.”

Carson says there have been no regrets with either of his career decisions. “I have had the best of both worlds and feel very fortunate that I have had the opportunity of doing two things that I continue to love.”