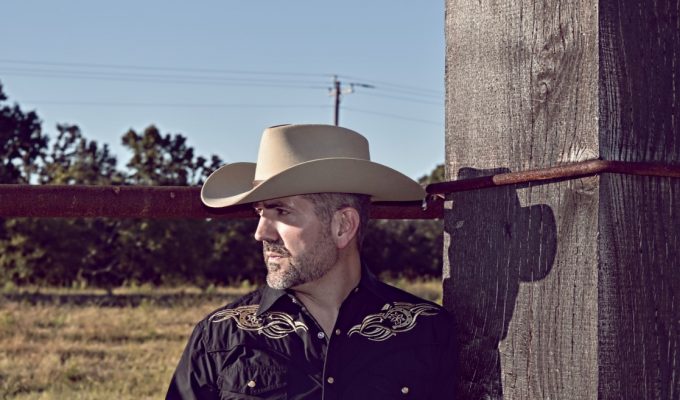 There are those rare moments in time when the stars and planets align and something great happens, like when singer/songwriter, Jamie Richards, picks up a pen and paper. The proof can be found in the hits he’s penned, including six number ones! “Second-Hand Smoke,” co-written with Mark Powell, was named song of the year in 2016.

Jamie honed his craft as a staff songwriter for Curb Records in Nashville, working alongside the industry’s finest. He learned how to package a song and develop a signature sound blending honest country roots with an exciting modern edge. And, he brought all that, along with a phenomenal voice, to the Texas/Oklahoma Music scene, quickly establishing him as a top-level pro.

He is respected by his peers, having had songs recorded by Cody Jinks, Hal Ketchum, Ken Mellons, Kevin Fowler and more. His song, “One Tequila” was featured in the movie, “Zoe.”

But for Jamie Richards, it doesn’t stop with the songwriting. Carrying the country music torch, he channels music straight from his heart to the audience. From ballads done in true Merle Haggard style to toe-tapping party tunes, he delivers every time consistently!

There is no one on the Texas Country Music Scene who has the complete package like Jamie does.

His vocal ability is second to none, as evidenced by the many accolades and awards he’s received. He’s lived enough, loved and lost enough and defied the odds enough to write and perform songs that speak with undeniable emotions to the heart. Simply put, Jamie can make his audience feel the lyrics he sings. For that reason, fans will often drive for hundreds of miles to attend a show. Jamie instinctively knows what his followers want – a honky-tonk singer with a bold edge and an honest delivery, and that’s what he gives.

He is the true working man’s entertainer with the heart of a poet and soul of a troubadour.

Born and raised in East Texas, Wade Skinner learned to play guitar and sing at an early age. At home, music was a regular part of his upbringing. It was a rare evening when he and his father and brothers did not sit down to play music on flat-top guitars. Every family gathering with the Skinners always included music — usually bluegrass, country, and gospel. Wade’s father taught him how to play guitar and enrolled him in classical piano lessons as a boy. From the seventh grade through High School, Wade was in choir every single year. In High School, Wade was selected to be a part of the elite singing group at his school; this group afforded him his first opportunity to perform country music in front of a live audience and with a band. In High School, Wade learned to play the drums and bass guitar. Wade joined the College Choir his second year in College and played part-time in a local church band as the guitarist. After transferring to the University of North Texas, Wade played bass and guitar in the University’s Baptist Student Ministry. In college, Wade developed a love for poetry that eventually translated into songwriting, but only after a great deal of personal tragedy. Inspired by a desire to counter the decline in country music’s progressive bent with its canned lyrics and crossover appeal, Wade began writing songs that were designed to tap into the deepest roots of country music — blues and bluegrass. “The best songs,” according to Wade, “are first poetry. They are written specific enough to show the concrete reality of the gritty details of life but broad enough to appeal to the human experience of all kinds of people. They simultaneously uncover the nature of reality in a broken world and expose possible answers to the question: ‘how should a life be lived under the sun?’” This is why he calls his approach to country music “country music for the soul.” Indeed, this is the goal of Wade’s debut full album Through the Fire — to touch the human soul.

Wade’s background is eclectic, to say the least. Wade and his wife live in Longview, TX with their five children. Along with his deep commitment to family, Wade has a deep spiritual life, and his love for the Bible and experience in pastoral ministry show up in the themes of his lyrics. As a former Corporal in the US Marines and a 1st Lt. in the US Army, Wade’s military background has informed the way he approaches all of life. Wade has worked for the past decade as a College English Instructor; as his students continue to attest, his favorite part of teaching is poetry because he is able to connect the themes and poetic conventions of the greatest works in the past with the lyrics of the popular American music culture. Wade is a music lover to the soles of his feet. His library of interests contain samples from every genre, but his favorites include classical, traditional country, blues, classic rock, and bluegrass. His country music heroes include George Jones, Merle Haggard, Vern Gosden, Willie Nelson, Waylon Jennings, Clint Black, Hank Williams (Jr. and Sr.), Keith Whitley and more recently Cody Jinks.