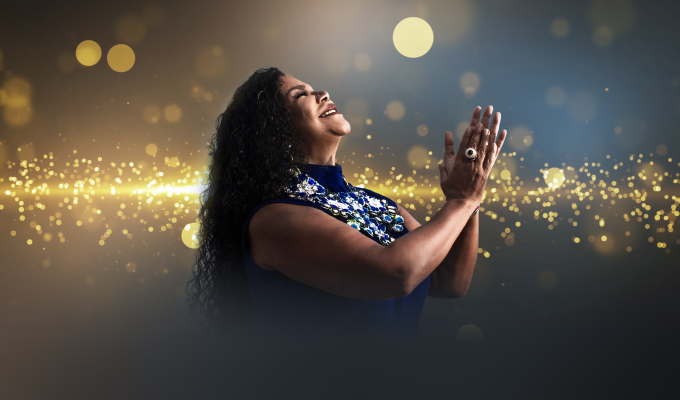 EVA AYLLÓN was born María Angélica Ayllón Urbina on February 7, 1956, adopting the name Eva after her maternal grandmother, who initiated her in vocalization at the age of three. Within a few years, she was singing at school and in youth competitions. Later, she performed on television and radio. In the early ’70s she began to appear in many of the local peñas criollas, a gathering of musician friends, and began to define herself as one of the leading interpreters of Peru’s música criolla.

From 1973 through 1975, she sang as the lead voice in the popular trio Los Kipus, eventually leaving the group to pursue a solo career. By 1979, she began touring internationally, with appearances in Europe, the United States, Canada, and Japan. Since then, her music and live performances are requested on a yearly basis at international music events. In addition to música criolla, Eva emerged as the leading exponent of Afro-Peruvian landós and festejos.

The most important interpreter of Peruvian music, deservedly known as the Queen of Landó, is today at her musical peak. Ayllón’s recording career spans over 20 albums. In 2003, her album, titled Eva, was nominated for a Latin Grammy in the Best Folk Album category. The prior year, Eva received her eighth award for achieving double-platinum status for the album 30 años en Vivo. The album celebrated her professional career of 30 years, which she presented before 30,000 adoring fans in Lima. Ayllón is one of the only Peruvian artists on the international stage that can completely sell out a performance venue.

Ayllón released her first U.S. album, Eva! Leyenda Peruana, on Times Square Records in 2004. Since then, her musical presence continues to expand its boundaries. In her commitment to broaden the awareness of Afro-Peruvian culture, Ayllón changed her residence from Lima, Peru to New Jersey last year. Since then, she and her group have been touring across Europe, North America, and Latin America extensively. Leyenda Peruana was extremely well-received everywhere, and in Germany it received the Critic’s Choice award for best traditional recording. In December of 2005, Eva returned to Lima to perform her first concert since her departure. She was asked to open for Marc Anthony, where they sang a duet together in front of 30,000 fans. In April of 2007, Ayllón had the honor of singing at the inauguration of the first woman elected to the highest office in the neighboring nation of Chile.

In the fall of 2007, Eva Ayllon En Vivo: Live From Hollywood was released, which includes a live concert recorded at the Ford Amphitheatre in the summer of 2006.

“Being able to sing is the most wonderful gift that God bestowed on me and singing for my country, Peru, gives me a sense of great pride. Thanks to each and every single one of you who have supported me during my career, and thanks for keeping me in a little place in your hearts and in your homes.” — Eva Ayllón