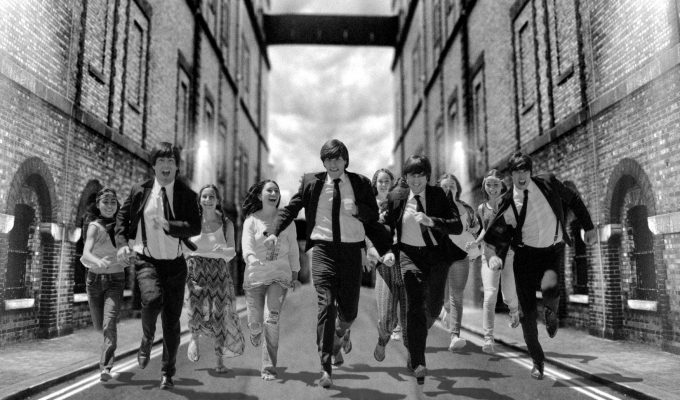 ARLINGTON, TX (October 9, 2021) The award-winning tribute band, Abbey Road, will perform Christmas with the Beatles at the Arlington Music Hall on Wednesday, December 8 at 7:30 pm. Dallas-based Rolling Stones tribute band, Satisfaction, will play an opening set. Both bands performed with the Beatles vs. Stones – A Musical Showdown production which sold the AMH to capacity in 2017 and 2018.

Featuring all the top hits of the Beatles along with some great holiday tunes, Abbey Road’s Christmas with The Beatles promises to be a night of fun. Abbey Road recreates an authentic Beatles concert experience, with period-accurate costume changes, too. Don’t miss this special night filled with Abbey Road’s mash-ups of Christmas classics and Beatles faves.

Calendar: Christmas with the Beatles featuring Abbey Road comes to the Arlington Music Hall on Wednesday, December 8 at 7:30 pm. This special night is filled with Abbey Road’s mash-ups of Christmas classics and Beatles faves.

Dallas-based Rolling Stones tribute band, Satisfaction, will perform an opening set. Tickets are $25-$65, plus ticket fees, and may be purchased by phone at (817) 226-4400, at the Theatre Box Office or online at www.arlingtonmusichall.net. The Arlington Music Hall is located at 224 N Center St, Arlington, Texas 76011. The show is appropriate for all ages.

And here is some additional information about the Abbey Road band:

With their tight harmonies, flawless note for note renditions of Beatles hits, custom-tailored costumes, vintage instruments, Liverpudlian dialect and precise attention to every detail, Abbey Road has honed their show to become one of the most musically and visually satisfying Beatle tribute acts in the world. Abbey Road recreates the magic, music, wit and charm of the Beatles, including the Fab Four’s cheeky personalities, familiar onstage banter and patter between songs.

The band earned a “Roar of the Crowd” award in 2009 for being the highest online rated production for the week. The show was ranked higher than Ain’t Misbehavin’ at the Ahmanson Theatre, Dirty Dancing at the Pantages Theatre and a national tour of Hairspray.

Three costume changes cover the full range of the Beatle experience and beyond, with authentic early black Beatle suits, Sgt. Pepper’s regalia and Abbey Road attire. Hear the piccolo trumpet solo on Penny Lane and the full orchestration of A Day in the Life. Relive the emotional intensity of Paul’s moving Yesterday solo, as well as the high energy of stadium songs like Twist and Shout and other Beatle hits. www.abbeyroadtribute.com and www.facebook.com/abbeyroadtribute

Here is some additional information about Satisfaction: Based in Dallas, “Satisfaction/The International Rolling Stones Show” is the international touring tribute show to the World’s Greatest Rock & Roll Band. This Billboard & Pollstar highly rated show are entering their 24th year in production with over 4000 performances listed. to their credit. Their client list includes the nation’s top casinos, performing arts centers, music halls and corporate clients. Performing up to 150 shows a year, this highly acclaimed production showcases the most authentic cast & costuming of its kind. The likes of Mick Jagger, Keith Richards and cast bring a colorful performance to over 50 years of classic hits. They have been featured in Rolling Stone magazine, Showbiz Magazine, Las Vegas Today, CBS Sunday Morning news and hundreds of national newspapers, magazines, television & radio as the world’s greatest show honoring the Rolling Stones and their legacy.

2005: The production became the first ever Rolling Stones show to debut on the Las Vegas strip as part of Legends In Concert Show. They received outstanding reviews as well as feature cover stories in the Las Vegas Sun and ShowBiz magazine.

2007: The group was a featured artist on national television news in the CBS News/New York special on the rising popularity of the tribute industry.

2008: The show was chosen by Paramount Pictures and the IMAX Corporation to perform promotional concerts for the Rolling Stones concert film “Shine a Light” by Martin Scorsese throughout the USA.

2010: The group received their highest accolades ever as they were approved by the Rolling Stones to perform long term engagements with the Walt Disney Corporation. They also embarked on their first ever tour of Russia with sold out shows in Moscow and St. Petersburg.

2011: The group launched a new project entitled “A Symphony for the Devil” featuring the group performing with symphony orchestras around the world.

Las Vegas Sun: “Shined just like the real Stones on the strip”

CBS News New York: “A must see…go get Satisfaction”

New York Examiner: “The best show of its kind…ever!”

“Washington Post: “A spot on portrayal to the Rolling Stones”