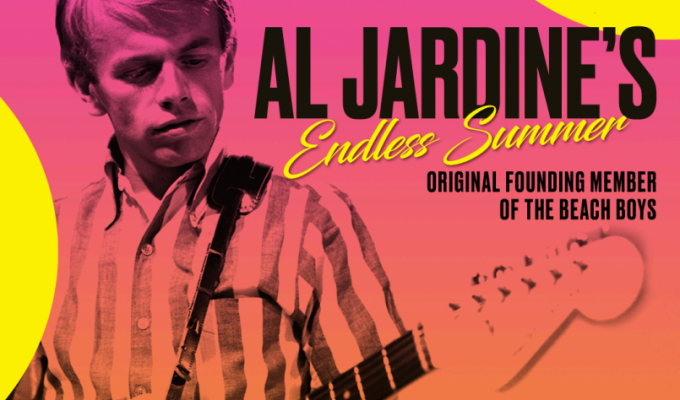 Alan (aka “Al”) Jardine, guitarist, vocalist and songwriter, is best known for being one of the founding members of the California-based group The Beach Boys. Al was born in Lima, Ohio, on September 3, 1942 and met Brian, Carl and Dennis Wilson, Mike Love and David Marks after his family moved to Hawthorne, California. Al played mainly rhythm guitar and sang harmony vocals with The Beach Boys and sang lead on their No. 1 hit “Help Me, Rhonda.” In 2001, Al was awarded a Lifetime Achievement Award Grammy as a member of The Beach Boys.

In 2018, Al began playing solo shows on a tour featuring songs and stories from his early days to his most recent solo album A Postcard from California. Al’s Endless Summer Band includes his son Matt Jardine, who also performs regularly on Brian Wilson’s current tour, plus Debbie Shair (from the band Heart) and longtime Beach Boys backing band members Ed Carter and Bobby Figueroa. Combining never-before-heard stories with rare pictures and videos from Al’s amazing 60+ years career, Al Jardine’s Endless Summer delivers an intimate show full of hits and rarities and continues to receive rave reviews from fans and critics. It is truly a show not to be missed!