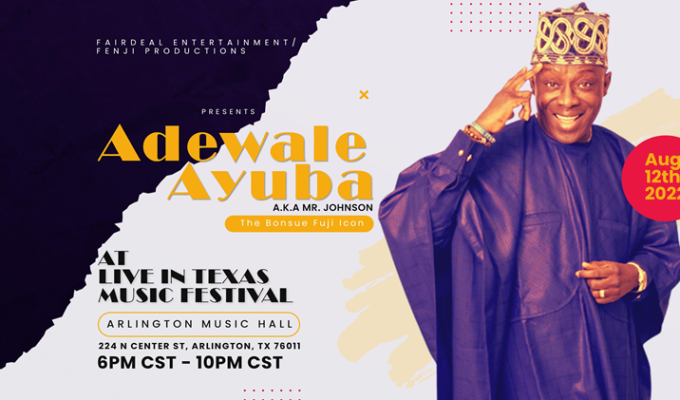 Adewale Ayuba, popularly known as Ayuba, Mr. Johnson, and the Bonsue-fuji maestro, was born on 6 May 1966 in Ikenne Remo, Ogun State, Nigeria. He grew up as a child singer, and by the age of eight he had started singing at local musical competitions and fiestas in Ikenne. This led to him pursuing music as a career after his secondary school education at Remo Secondary School, Sagamu, Ogun State.
Although he had gained admission to study Architecture at the Ogun State Polytechnic in Abeokuta, his music career took center stage. To carve a niche for himself, Ayuba released his first album Ibere (Beginning) at the age of 17 and as a result he rose rapidly in the Fuji music scene, which is a genre under World Music. In early 1990, Ayuba signed with Sony Music (Nigerian) to record an album, Bubble, which was released in 1991 and brought Ayuba into international prominence.
Bubble marked the first time in history that a Fuji Music album gained widespread recognition, topping music charts for six consecutive months and winning multiple awards at the Nigerian Music Awards (NMA). It also won Ayuba the coveted Artiste of the Year Awards, including the Album of the Year Award, Song of the Year Award, and Best Fuji Album of the Year Award—four in all. With the success of Bubble, Ayuba hit the pinnacle of his career in Nigeria/Africa. Ayuba’s high-tech instrumentation and distinct voice changed the face of Fuji Music. For the first time in History, the Nigerian Elite, who until then had ignored Fuji Music, embraced it. After the success of Bubble, Ayuba released a follow-up album, Mr. Johnson Play For Me (also on the Sony Music Nigeria label), which also became an instant success in 1992. In 1993, Ayuba was signed to Premier Music (Nigeria) before embarking on his first West Africa coast tour, performing in several African countries.
The success of this tour led to his first US tour, also in 1993, during which Ayuba performed in over ten states. He also successfully performed at the world-renowned New Orleans Jazz Festival. In addition, he was awarded the Key to the City of Providence, Rhode Island by its mayor after two successful concerts there. His Los Angeles debut was also a success, and C.C. Smith of Los Angeles Weekly Magazine wrote that “Ayuba bases his Fuji on two elemental forces—rhythm, and the human voice—to create compelling, enchanting and powerful sound.
Whenever you think of Adewale Ayuba, expect frenzied dancing style and colorful costumes,
exultant fans and enough talking drums and percussion to remedy even a terminal case of sensory deprivation. Without further ado, It’s a great pleasure to present to you Adewale Ayuba (a.k.a. Mr. Johnson) at the Arlington Music Hall for the first time in 2022, by Fairdeal Entertainment