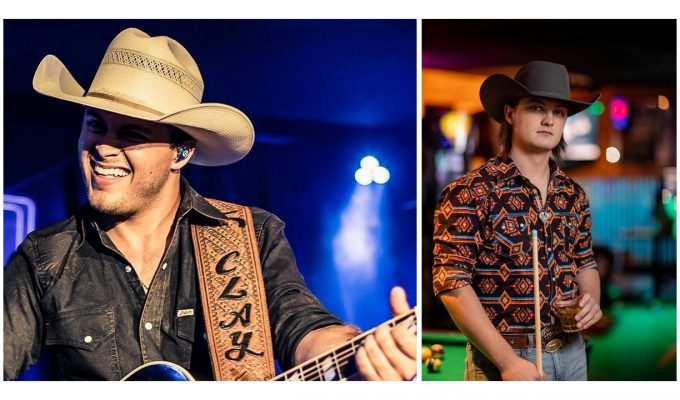 Clay Hollis presents country music, in its purest form; simple and powerful. Born in the Rio Grande Valley and raised in San Antonio, his mother is from Laredo and with his father being from Dallas, Hollis’ Texas and Hispanic roots run deep. Cultural and musical traditions define Clay’s tried and true brand, paying homage to country music legends like Strait and Jones, with a touch of contemporary grit.
‍
A music fan as long as he can recall, Clay’s passion for performance developed at a very young age. Friendships with other neo-traditionalists have helped his career begin to blossom. Mario Flores, Gabe Garcia, Bart Butler, Jon Wolfe, and Jon Pardi have all lent a helpful hand to the young singer. With the aid of talented accomplices, he released his self-titled, debut EP in 2017, which featured the single, “Look Who’s Hurting Now.” Clay is set to release his highly anticipated follow-up EP in 2020.
‍
Hollis’ family and close-knit group of friends strongly support his musical ambition as well as his desire to serve his community. When not on stage, or in a college classroom (studying for a degree in the music business,) Hollis can be found Offshore fishing in his free time as well as volunteers his time to nonprofit organizations, such as 4-H / FFA and Trinity Oaks. With time and karma on his side, classic Texas good looks and a rich, powerful voice, the future is very bright for the young troubadour.

Adopted by Harlon and Jodean Sampley at 4 months old and born and raised in the
small town of Sanger, Texas, Daniel started singing at the young age of 3 years old.
Singing at church every Sunday and revered places such as The Johnnie High Show,
Mesquite Rodeo City Music Hall, North Texas State Fair and Rodeo, and countless
others, Daniel quickly grew to learn what it meant to perform in front of large crowds
and entertain the masses. As the years flew by, Daniel grew to learn and sing the songs
of country artists such as George Strait, Alan Jackson, Tracy Lawerence, Vince Gill,
Brooks & Dunn, and many other 80s, 90s, and early 2000s country artists. Daniel’s
Father passed away in January of 2008 and that put a hold on his music career for the
time being.
Fast forward to 2013, Daniel graduated from Sanger High School and immediately
went to boot camp for The United States Marine Corps and served 5 years as a H-1
Helicopter Mechanic in Camp Pendleton, California. During that time, Daniel missed
performing on a stage and decided to pick up a guitar and learn how to play and write
songs after meeting Texas Country artists Randy Rogers and Cody Johnson at a show
in Bakersfield, California. Upon returning home to Texas, Daniel’s Mother passed away
in May of 2018. He quickly decided he wanted to pursue country music full-time and
bring that traditional country sound to the Texas Music Scene and uphold his family
name. Daniel became a member of the Texas Country Music Association in 2019 and
was awarded their Artist Scholarship for 2019 at the Texas Country Music Awards at
Billy Bob’s in Fort Worth, Texas.
Daniel released his debut single “The Drought” in January of 2020 with excellent
response and plans to release “Drinkin’ You Gone” in April while continuing to write
and prepare for an EP release at the end of 2020. You can follow him on all social
media and streaming platforms to keep up with his journey