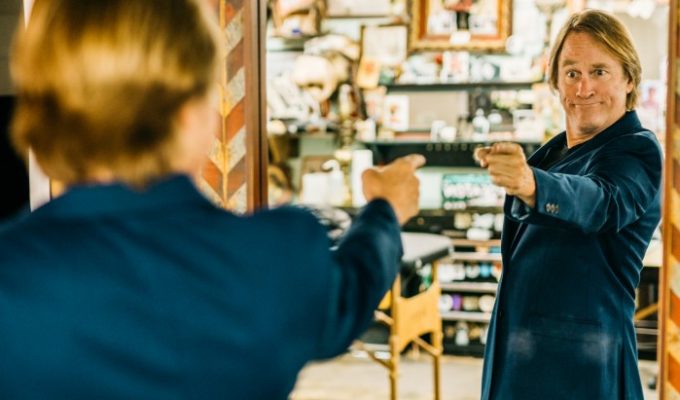 Brad Stine is known as the man that revolutionized and launched the new era of Christian comedy in America with his breakout album “Put a helmet on!” that single-handedly redefined the way Christian stand-up comedy could be perceived and performed.

His unique style, forged in the comedy clubs he performed in for years features sarcasm, biting wit and intelligence with an energetic approach with no topics off limits, all the while being the only comic that uses Judeo/Christian worldview as his social commentary, which was unheard of at that time in the Christian comedy genre and still is to this day!

His cutting edge brand literally opened the door for many other Christian comics to follow who have acknowledged his influence including Tim Hawkins, John Crist, and Michael Jr as well as a host of others whose careers and styles have been impacted by Brad Stine. The man the New Yorker magazine dubbed ”God’s Comic”.

He is also the most media covered Christian comedian in the country being featured in mainstream media outlets unlike any Christian comic before or since. Because Brad sees his comedy as being a missionary to America, Brads calling is to bring the gospel in unique ways to influence the cultural narrative. His success in that regard is unprecedented amongst which is an 8-page profile written about him and his comedy in the New Yorker magazine where he was referred to as “God’s Comic.”

Brad has been a regular live social commentator on Fox & Friends every Monday morning for six months.

He has been featured in the New York Times, Christian Science Monitor, Los Angeles Times, Wall Street Journal, and USA Today. He has been profiled on NBC Nightly News, HBO, Showtime, CNN, Glenn Beck, Hannity and Colmes, NPR’S Fresh Air, ABC Nightline TWICE, MTV, and Comedy Central. He has had material published in Readers Digest and Focus on the Family magazine.

He has five original DVDs featuring his comedy, and has written two books, Live from Middle America; Rants from a Red-State Comedian, published by Hudson Street Press and Being a Christian Without Being an Idiot.

He has appeared in numerous films as an actor and producer including, Persecuted, Christmas With a Capital C, My many sons, Welcome to Paradise, Sarah’s Choice, Homeless for the holidays, Marriage retreat, and many more to come.

He tours nationally on a regular basis performing in clubs, churches, and fundraisers for Pregnancy resource centers and other ministries and conservative causes.

The New Yorker magazine stated that Brad’s “style is frantic, aggressive, and caustic, with echoes of Robin Williams, Sam Kinison, and George Carlin.

– “In the competitive world of stand-up comedians, Mr. Stine has found a niche as a conservative Christian, riffing on topics like gay marriage, judicial activism and judges who cite precedents from foreign courts…”