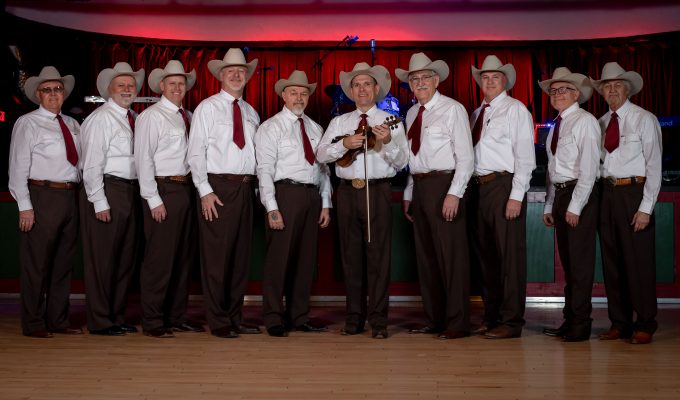 When Texas Playboys front man Jason Roberts steps onto a stage with his fiddle and utters his first “AH–ha” of the evening, western-swing fans know they’re seeing and hearing nothing less than the living embodiment of a tradition that stretches all the way back to 1933. That was the year the charismatic fiddler Bob Wills and several other musicians in a group called the Light Crust Doughboys broke away from Fort Worth’s Burris Mills and its autocratic business manager, W. Lee “Pappy” O’Daniel, to form their own band. As Bob Wills and His Texas Playboys, they became one of the most popular touring and recording acts in the nation, offering audiences the highly danceable musical mixture that came to be known as western swing.

Eventually, with the blessing of the Bob Wills estate, guitarist-producer Tommy Allsup, a longtime Wills collaborator, and Leon Rausch, the Playboys’ last great vocalist, took over Bob Wills’ Texas Playboys.  They continued squarely in the Wills style, delighting old fans and making new ones, until 2018, following the death of Allsup and the retirement of nonagenarian Rausch.

The Okies include trombonist Steve Ham, trumpeter Mike Bennett, drummer Tony Ramsey, and fiddler Shawn Howe. The contingent from south of the Red River boasts guitarist Rick McRae, a veteran of George Strait’s Ace in the Hole Band, along with piano player Wayne Glasson, steel-guitarist Dave Biller, saxophonist Larry Reed, and bassist Albert Quaid. Many of these top-notch players from both states have already done stints with the band’s earlier incarnations.