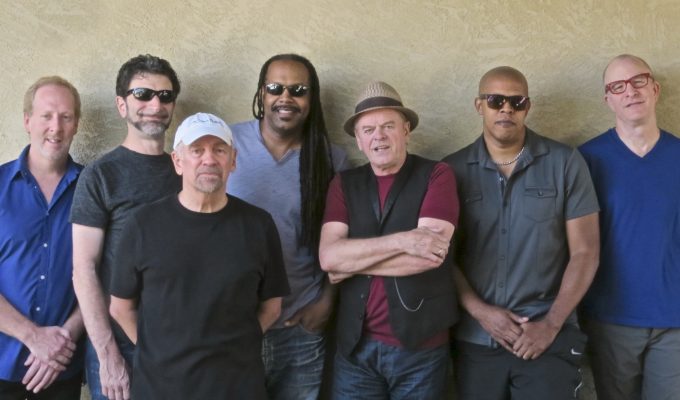 Veterans Day Special – Buy One Get One Free on any tickets this weekend (11/9 & 11/10 Shows ONLY). Enter “VETERANS” in the promo Code online or purchase at the concert.

For the better part of the last thirty years, the Average White Band has performed sold-out shows around the world, confirming the timeless appeal of their danceable funky soul. Formed in 1972, their roots may have been Scottish, but the collective heart of the band belonged to the soulful sounds coming out of Memphis, Detroit, and Philadelphia in the 1960’s.
In January 1975, their breakout single “Pick Up The Pieces” and the album AWB reached the top of the Pop and R&B charts. For the remainder of the decade, Average White Band took their killer groove around the world, leaving in their wake a trail of hits such as “Person to Person”, “Cut the Cake”, “Schoolboy Crush”, “A Love of Your Own” and “Queen of My Soul”. In 1980 the dance-single “Let’s Go ‘Round Again” enjoyed the longest chart run of the year in the United Kingdom (a recent cover by the UK vocalist Louise introduced the tune to the next generation!) The original line-up of six Scots disbanded in 1982, sharing the fate of many R&B artists who found themselves swimming against the strong tides of disco and punk rock. Ten albums, three Grammy nominations, and a large multi-racial following were the band’s legacy…but their story wasn’t over.
In 1989 the band regrouped around founders Alan Gorrie and Onnie McIntyre and has toured relentlessly ever since. Aided by American musicians Fred Vigdor, Klyde Jones, and Brian Dunne, AWB is committed to life on the road, because, explains Gorrie, “Making people dance is what we do best – we’re meant to be a live band.”
Capturing the excitement of AWB’s live show is a new DVD, Tonight – AWB in Concert, released in 2002 by Image Entertainment. Average White Band’s most recent audio CD, 1999’s Face to Face (EMI), captures the raw energy of a San Francisco appearance at the legendary Fillmore Auditorium. Also now in stores is a new collection from Atlantic/Rhino, Average White Band – the Essentials. A highly anticipated CD of original material is nearly complete and will be released in spring 2003.
One of the most “sampled” bands ever, Average White Band’s music has been used by over 200 hip-hop and rap artists, including Janet Jackson, Bobby Brown, TLC and Puff Daddy, and has influenced a whole new generation of funk and soul acts. In just the last few years, AWB’s number one hit “Pick Up The Pieces” has been given the big band treatment by Phil Collins, was turned into a “musical conversation” by comedian Chris Rock, was lyricized by jazz legend Jon Hendricks, and was used by Crest and Mitsubishi for television commercials. Guitarist Jeff Golub (with Avenue Blue) recently covered “Pieces”, “Cut the Cake” and “If I Ever Lose This Heaven”.