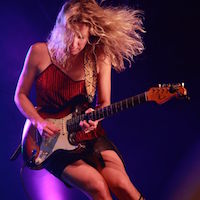 The only female guitarist part of the ‘all-star’ Experience Hendrix ’14 and ’17 line-up about her upcoming record: “In an era where most are skeptical about the current state and future of the music industry, I wanted TRILOGY to tell a different story. The record biz might be broken and Spotify might rip us off, but that can’t keep an artist down. Creativity is very much alive, and music is the celebration of life.’